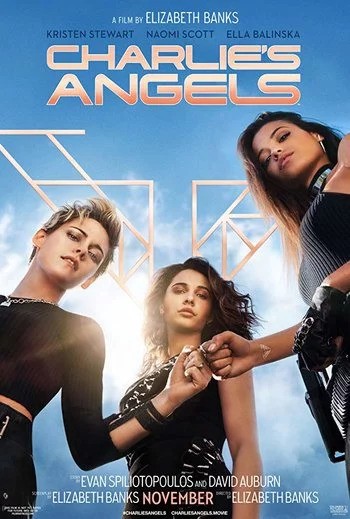 Keep an eye cocked throughout this review for the word “tedious” in all its grammatical forms, because it will recur.

As the father of two daughters – I raised them no differently than I would’ve sons, complete with karate classes, basketball league, soccer, a familiarity with guns and a no-nonsense, can-do attitude – I had come to respect feminism. Pay women less for the same work? Relegate them to specific professions? Deny them promotions? Exalt those that were round in the right places and didn’t mind showing it off? Hell with that!”

Ah, but that was the old feminism.

The latest incarnation of Charlie’s Angels was produced, written and directed by a woman – joy!! — specifically, Elizabeth Banks. The titular angels are played by Kristen Stewart (hazzah, she’s a lesbian in real life!!), Naomi Scott and Ella Balinska. Each comes from a different ethnic backgrounds (go, progressive Hollywood!!).

General manager Bosley is no longer a man (take that, male-privileged oppressors!!) but a trio of people, Patrick Stewart, Djimon Hounsou and Banks herself. What great strides we’ve made when even a woman can become a Bosley.

What follows is the ladies…yawn… waging war… yawn… against (what else)… yawn… evil males (redundant, no?). Barber gets it right when he calls this thing…

“… a bland, witless yet ludicrous international spy caper, a tediously formulaic sub-Mission: Impossible B-movie with the usual funky drumbeat on the soundtrack, the usual hyperactive editing that chops the fight scenes into confetti-sized fragments; the usual close-ups of car badges so that we know who paid for product placement, and the usual captions announcing that we are in Berlin or London or Istanbul (all of today’s action blockbusters are legally required to stop off in Istanbul). The structure is familiar, too. Like Kingsman: The Secret Service and Men In Black: International…”

Inane action sequences are interrupted by the ladies droning on ad nauseum about the feminist agenda (yawn) while the angels themselves – don’t hit me when I say this – are lamentably inept. They bungle. They let the bad guys get away more than once. They assault innocent bystanders. But at least they’re pretty. (Oh crap — am I allowed to say that?!?!)

Did I mention that Dwayne Johnson gets neutered? Well, okay, not physically. But here’s this pro wrestler turned ultimate Hollywood hunk, and he’s cast as a mild-mannered bookworm. I guess even men with bulky, rippling muscles are the weaker sex nowadays. Can’t out-testosterone the girls now, can we?

How can I say this diplomatically? The movie tanked at the box office. But at least Banks knows why. As she prophetically told the Herald Sun just before its opening weekend, “If this movie doesn’t make money it reinforces a stereotype in Hollywood that men don’t go see women do action movies.”

Got that? It’s men’s fault.

Sorry, sweetie-pie. The movie didn’t make money because its sucked. Among other things, it lacks the humor and playful charm of the franchise’s earlier Cameron Diaz/Drew Barrymore/Lucy Liu/Bill Murray incarnation.

But maybe that’s just as it should be. This is a project generated by #metoo feminism, which itself has become humorless, strident, mean-spirited, angry, unpleasant….