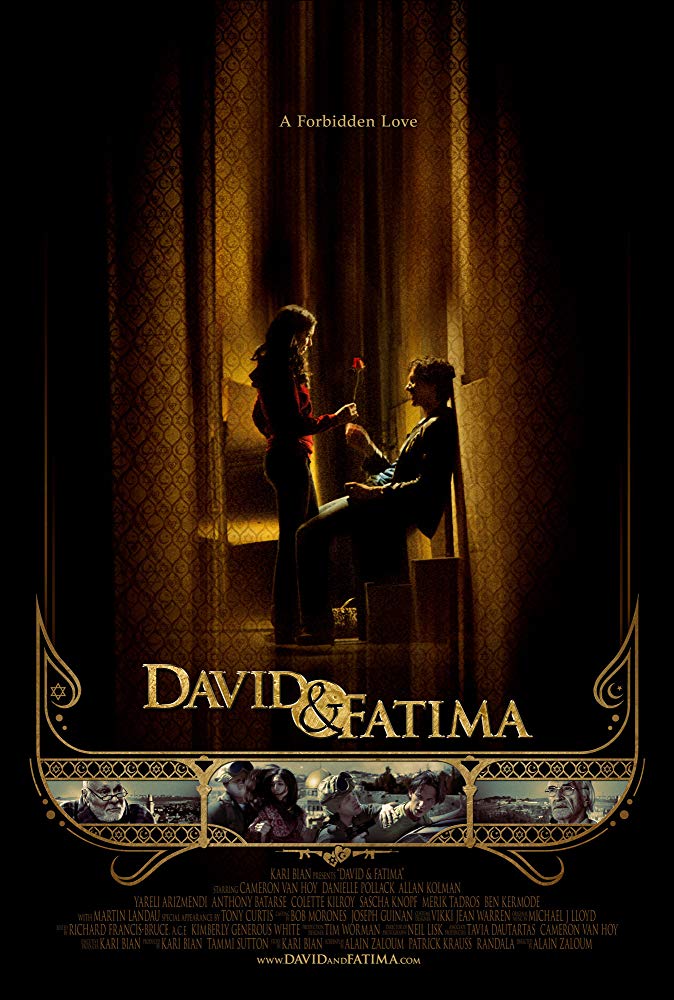 There are movies whose agendas push a political viewpoint. Then there are those that result in ruining lives and getting innocent people killed.

David & Fatima manages to be both.

The decade-old film, directed by Alain Zaloum and starring unknowns Cameron Van Hoy and Danielle Pollack as well as established Hollywood stars Martin Landau and Tony Curtis, was touted as encouraging Arab/Israeli peace. But like a spate of other movies just like it, it likely accomplishes exactly the opposite, encouraging Jews to not only toss their religious convictions in the name of some Hallmark Card-inspired spiritual euphoria, but to let down their guard against a implacable enemy whose own most cherished religious convictions include waging war against the entire planet until Allah reigns supreme, and murdering people they claim are descended from apes and pigs.

The film presents us with a Palestinian Muslim woman and an Israeli man from Jerusalem who fall in love (sigh). The intolerant parents disapprove, but (lingering sigh) they elope anyway. Landau is an elderly rabbi who has lost his faith (like seemingly every Jew in Hollywood, where this mess was perpetrated) and agrees to perform the forbidden marriage because hey, after all, c’mon, kids in love (really long, lingering… sigh).

Agenda #1: Judaism is antiquated and wears off after a while, and its tenets are to be discarded once the hormones kick in.

Agenda #2: Right and wrong are subjective; after all, we hate them just like they hate us, right?

Agenda #3: Love conquers all, including 14 centuries (that’s how old Islam is) of persecution, degradation, murder, terrorism and all-around jihad.

Judaism’s tenets are not to be discarded. Right and wrong are not subjective, no matter how many innocent people the hooded Antifa thugs beat up in the name of opposing fascism; and what conquers all is, all too often, hideous violence, not love. If Jews hate Muslims, it’s only because Muslims have been killing Jews since the 7th century. On the other hand, Muslims hate Jews because they are Jews.

How about some real-life Jewish-Muslim love stories from Israeli news site Arutz Sheva:

“Learn and Return, an organization that works to prevent Jewish women and girls from getting trapped in abusive relationships with Arab men, has uncovered the shocking truth of an epidemic of young Jewish girls being forced into drug use and prostitution by older Arab men.

“Mishmar Ezrachi, of Beersheva in southern Israel, reported to Learn and Return’s rescue counselor how numerous Jewish girls from the area had been lured into relationships with Bedouin Arabs through gifts and kindness, and willingly follow their suitors to their village. But once there, the girls were forced to take drugs and turned into addicts. Then they are forced prostitute themselves in order to earn money to support their habit.

“Beersheva, Dimona, Ofakim and Sderot have a lot of poor families,” says Shlomo Cohen, a rescue worker for Learn and Return. “Poverty makes young girls vulnerable to the overtures of older Arab men looking to seduce them and force them into drugs and a lifetime of abuse and prostitution. We are talking about hundreds of young girls, many underage, who are now trapped. They may have been tricked into going willingly at first, but they are not there willingly now – they are addicted to drugs and need help to get out.”

“Since the girls went willingly, the government doesn’t intervene. “They are aware of the problem, but there is no place to put these girls, especially after they bear children,” Cohen says. “Someone has to do something. The girls are terribly abused both physically and emotionally, and live like dogs picking up scraps of food.”

“The organization estimates that more than 20,000 Jewish girls are currently trapped in Arab villages under similar circumstances. The numbers rise daily, they say.”