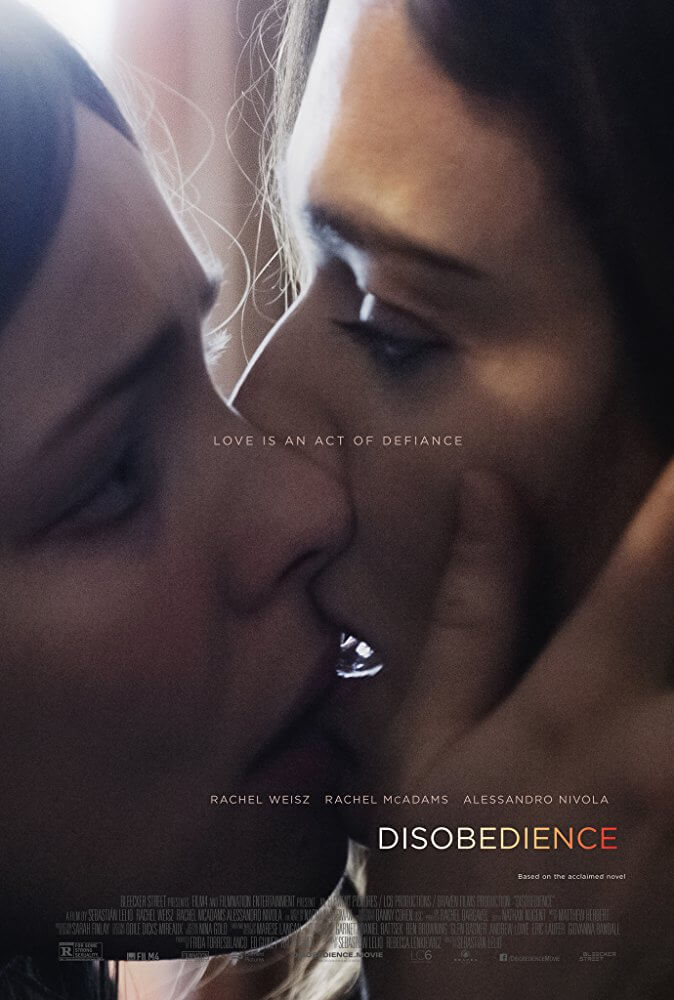 Spoiler alert: it’s the 21st century and it’s Hollywood, so you already know which side wins here, right?

In one corner: 4,000 years of history and heritage, and the very basis of Western civilization. A lifetime of religious training and commitment. Holiness. Sacred vows made to a spouse. The prospect of building a family. Being part of a supportive community. A career teaching at a local girls’ school. Basic honesty and decency.

In the other corner: vagina.

Here’s how some poorly-paid Tinseltown PR copywriter says it: “A woman returns to the community that shunned her for her attraction to a childhood friend. Once back, their passions reignite as they explore the boundaries of faith and sexuality.”

Now, the woman wrapped around one of the vaginas in question (Ronit Krushka, played by Rachel Weisz) is an emotional mess; a social outcast who hooks up with guys in public toilets, has no real religious sense, moral basis or self-respect; was disowned by her own father and left unmentioned in the obituary; and, by the way, has no qualms about breaking up the marriage of her ex-squeeze, now a wig-wearing Orthodox Jewish wife (Esti Kooperman, played by Rachel McAdams) because she also, by some happy coincidence, loves, yes, vagina, and is willing to trade everything she has or could have for it.

Needless to say (what the hell, I’ll say it anyway), the religious Jews are portrayed as humorless, cold, scowling, judgmental, I can stop with the adjectives now, yes?

The deceased rabbi/father, naturally, is the obligatory artistic representation of God, who apparently at some point along the way pissed off director Sebastian Lelio, novelist Naomi Alderman, whose book this movie is based on (I’ve seen a photo of her, so I understand where she’s coming from; she’s also the “author” of a video game called Zombies, Run! 2) and everyone else connected with this all-too-predictable, puerile and pathetically politically correct production.

The topper is that the cuckolded husband, the scholarly and warm Rabbi Dovid Kuperman (Alessandro Nivola), though initially anguished, ends up feeling just peachy about his wife’s infidelity; he’s all for freedom, after all, which was the topic of the sermon on the dead rabbi’s lips when he croaked in synagogue (see, the Bible itself proves Jews are hypocrites!). It’s a viewpoint no Orthodox Jew worth his circumcision would ever adopt in real life, given that homosexuality is referred to in the Torah as an “abomination” punishable by death, and lesbianism is strictly forbidden in Judaism’s great legal code, the Shulchan Aruch.

Oh, warm and fuzzy Rabbi Dovid is also apparently fine with his now re-lesbianed wife taking off with their soon-to-be son. Yeah, near the end we find out Esti is, as schlocky drama insists she must be, pregnant.

And hey, the sex is really hot, too, like when the girls make out in a dark and stinky alley, or when Ronit drools spit down into Esti’s welcoming mouth. Yum.

Tragically, in our lamentable latter age, little things like the aforementioned “4,000 years of history and heritage and the very basis of Western civilization, etc.” don’t mean much when compared to giving God, religion, values and social convention the middle finger, or of course a woman’s God-given right to jam her face into a similarly female crotch.

Let me save you the trouble by saying it myself: Oy.