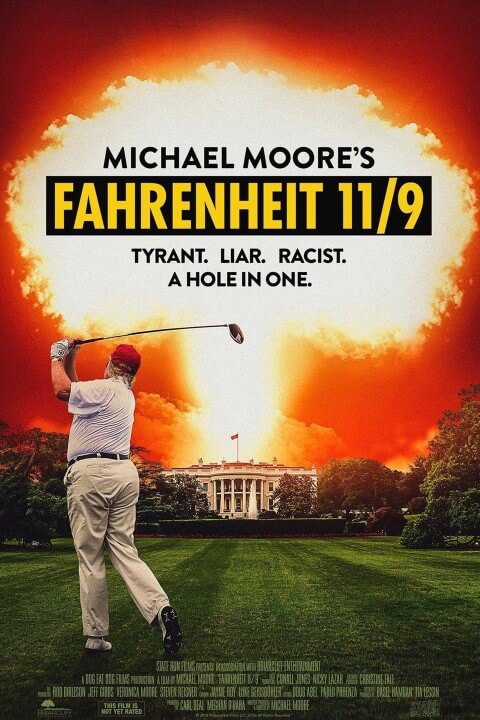 One wonders when he had time to over-eat.

Fahrenheit 11/9 is a brainless political documentary released earlier this year by filmmaker Moore (of Fahrenheit 9/11 and Bowling for Columbine fame) about the 2016 United States presidential election and the subsequent presidency of Donald Trump.

Here’s a detailed synopsis: Donald Trump is evil and there’s something polluted about the America that elected him.

That’s about as deep as Moore’s thought process ever goes as he drags himself across the country asking people how they could possibly have voted for Trump, and taking shots at capitalism, the electoral college, the media and the prevalent zeitgeist.

That Moore demonizes Trump goes without saying, but it descends from there, devolving into what journalist Glenn Greenwald calls a “fairy tale as ominous music plays in the background, a villain unlike any we had previously known invaded our idyllic land, vandalized our sacred public spaces, degraded our admired halls of power, threatened our collective values. It was only upon Trump’s assumption of power that the nation’s noble aspirations were repudiated in favor of a far darker and more sinister vision, one wholly alien to “Who We Are”: a profoundly “un-American” tapestry of plutocracy, kleptocracy, autocracy, xenophobia, racism, elite lawlessness, indifference and even aggressive cruelty toward the most vulnerable and marginalized. This myth is not just false but self-evidently so. Yet it persists, and thrives, because it serves so many powerful interests at once.”

And Greenwald is a freakin’ liberal.

Here’s what Moore said during an interview with Amy Goodman of DemocracyNow! (not to be confused with Jeb!):

“We’re in a different kind of war now. We’re in a war with not just an individual who has taken over the White House—because, again, he wasn’t elected, but he was appointed by the Electoral College—but Trump is the result of decades, decades of us allowing this country to go down a road that had very little to do with democracy and equal rights and what was fair, and very much toward letting the rich, letting corporate America, Wall Street run the show and call the shots.

“So, when I say, for instance, that Donald Trump doesn’t care much about democracy and is trying to whittle away whatever he can of what we call our democracy, that’s really, to be fair to him, not really unusual. He’s a CEO. He’s a billionaire. Generally CEOs don’t run their businesses like democracies. They don’t like democracy. That’s not how they live. It’s not how they run their business. And as billionaires, they want to grab as much of the pie for themselves as possible. So they’re not into everybody having a slice of the pie or a fair slice of the pie or a seat at the table. So, he’s really just acting like most people of his class.”

Get it? Capitalists are destroyers….… whines Yet another wealthy Hollywood twinkie.

Viewer reaction is as predictable as CNN’s daily reportage. Those who want activist judges to legislate wildly from the bench, higher taxes, a weak military, and major cities protecting the most vile criminals liked it. Moviegoers who respect the Constitution and want their families safe within secure borders, lower taxes, a strong military and some assurance that there won’t be an infinite number of Kate Steinles… well, they probably didn’t go see it. They were the smart ones.

Anthony Lane of the New Yorker noted, “While there are a few moments in the movie that can be said to be Moore at his best, the production as a whole may be Moore at his worst.” James Berardinelli of ReelViews was a bit kinder: “Less partisan viewers may find the film quite long, and not a lot more than a rehash of Moore’s political obsessions. If you know his earlier work, you’ll find no surprises here.”

No, no surprises here at all.