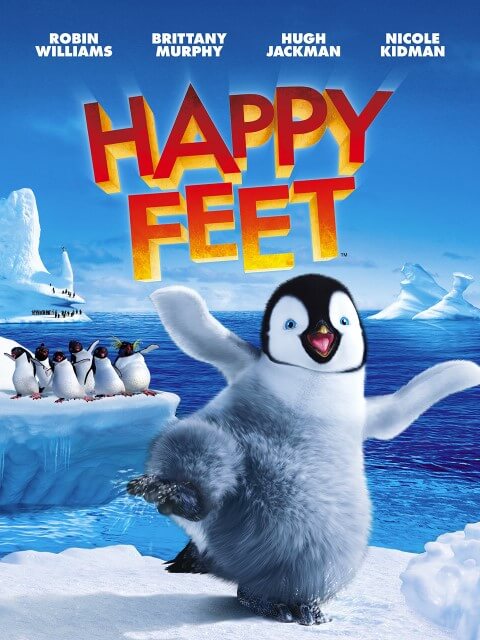 For once, environmentalism is just a red herring. Sure, Happy Feet does touch on green themes, with humans cluttering up the Arctic mainland with refuse and overfishing the surrounding oceans. But the last minute unification of humans to save the penguins is just that: last minute. Harping on the eco-friendly agenda only distracts from the real program: a two-part hit on traditional order.

Free love carries the day in Happy Feet. In what is now a typical trope in kids movies, Mumbles, the protagonist, is born different than his peers. In this movie, it’s that he can’t sing.

In case it’s unclear, singing is code for sex.

Worse, he’s footloose, and his dancing is somehow more offensive to his puritanical leaders than the suggestive singing, bumping and grinding all the penguins have been doing up until now. His “easy ways” are believed to be the source of all that’s wrong for the colony.

Despite his assertion that he can’t change how he is, Mumbles is banished, later resurfacing to bring an end to the problems that have plagued the colony and overthrow the old, repressive order. He’s helped on this quest of self-discovery by a cadre of bro penguins who advocate free love in many forms.

If there’s any doubt that this movie isn’t about Mumbles’ journey to sexual discovery, one need look no further than his arrested development. Unlike his peers who are physically mature and ready to mate by the quarter mark of the film, Mumbles isn’t able to shed his baby down and enter adulthood until he and his society support his sexual deviance as legitimate.

I’ll leave that there to marinate in children’s minds while I move on to the other troubling motif.

Of course, when Mumbles brings his message of love to his people he is roadblocked. Not by his peers, who take to the new dancing craze like penguins to water, but by that age-old nemesis of individuality, the religion.

To put it simply: the kids want to dance but the church won’t let them.

I’m deliberately writing church because Happy Feet isn’t shy about naming the enemy of the people. There’s hymnal chanting, hellfire preachers, and Christian rhetoric parodied throughout. It’s impossible not to read Southern Evangelical into the character of Noah, the colony’s spiritual guide.

It’s made clear that religion is the antagonist of Mumbles’ fight for acceptance and not the biological fact that emperor penguins use songs to mate, not dance. And, of course, in the end, the leaders are shown to be impotent fools in the face of Mumble’s courageous stand for his truth and are unanimously rejected by the colony.

If you’re still doubtful about the connection, the producers make sure you can’t miss it. When Mumbles and the gang come across an abandoned human site, the very first image shown is a church. By pairing this symbolism with human destruction of the planet, the movie further cements religion as a destructive force.

A hot mess in the snow

This is honestly the one time I wish the writers had stuck with a  heavy-handed eco-friendly plot. The adult nature of this movie and its themes makes it uncomfortably inappropriate on so many, many levels.

So naturally, there’s a sequel.