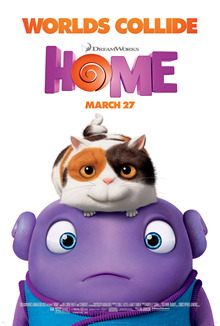 First, there’s dad. Or, the lack of dad. But first things first.

A loveable but cowardly alien race, the Boov, is escaping yet again from baddies (the Gorg) who keep trying to destroy them. They arrive on Earth, effortlessly transfer mankind to Australia, inhabit the now empty cities, and commence to hiding. Only, the aliens missed one little girl, Tip (a nickname; her real name is Gratuity… Gratuity?) Tucci, who was left behind along with her cat. Together with a loveable misfit alien and main character named Oh (voiced by Jim Parsons), fellow outcast Tip (Rihanna) goes on a rollicking road trip in search of Tip’s mom (Jennifer Lopez), become best buds and learn life lessons along the way that lead (spoiler alert, well, kinda) to the inevitable happy ending.

What could be bad?

Back to the dad/lack of. There is no mention of Tip’s father. At all. Ever. Just to be sure, I searched the script for “Dad,” “Father,” “Pop,” even “Husband.” Nada. It’s as if the child’s father was completely unimportant, not worth so much as a mention — as if the masculine side of the parenting equation is so unimportant that, why even bother with it.

Oh, I forgot, this came out of Hollywood.

The second has to do with the movie’s ending and ultimate takeaway. Here’s this raging, murderous, conquering group of monsters, the Gorg, aiming to extinctify the gentle Boov since even before the friggin’ movie begins….. but it turns out their leader is really a cuddly little munchkin who only wants his (her?) eggs back (anyone remember Star Trek’s Horta or Carl Kolchak’s reptilian creature, or am I severely dating myself?). They aren’t reeeeally bad folks, the Gorg. Just give them what they want and they’ll stop the genocidal slaughtering and reveal their mushy love-bug side.

Anyone ever hear of Islam? No? Maybe this will help — Terrorism? Jihad? Mass murder? Stonings? Gays tossed off rooves? Beheadings? Honor killings? Wars of conquest? Smoldering churches and synagogues? Sweden as the rape capitol of Europe? Acid in the face? Jews as the descendants of pigs and apes? Infants in toy shrapnel vests? Female genital mutilation? No-go zones? Allahu Akbar? 9/11? Jizya? Slavery in the 21st century?

Any of this ringing any bells out there?

But, why worry. If you’re a liberal, none of this means that Islam is a violent, hateful Dark Ages religion, or that Islamic culture – awash in blood, devastation, ruined lives and severed body parts as it is – is any worse than yours or mine. Let’s just give them what they want and we’ll soon realize that everyone is the same, all religions and cultures are equal, and we can all join hands as part of the family of man.

A recipe for endless horror?

But that’s not what Home is teaching our children. Instead, simply roll over and play dead. The film is a recipe for victimhood and – what the hell, I’ll say it – the end of Western Judeo-Christian civilization and a global descent into permanent madness.