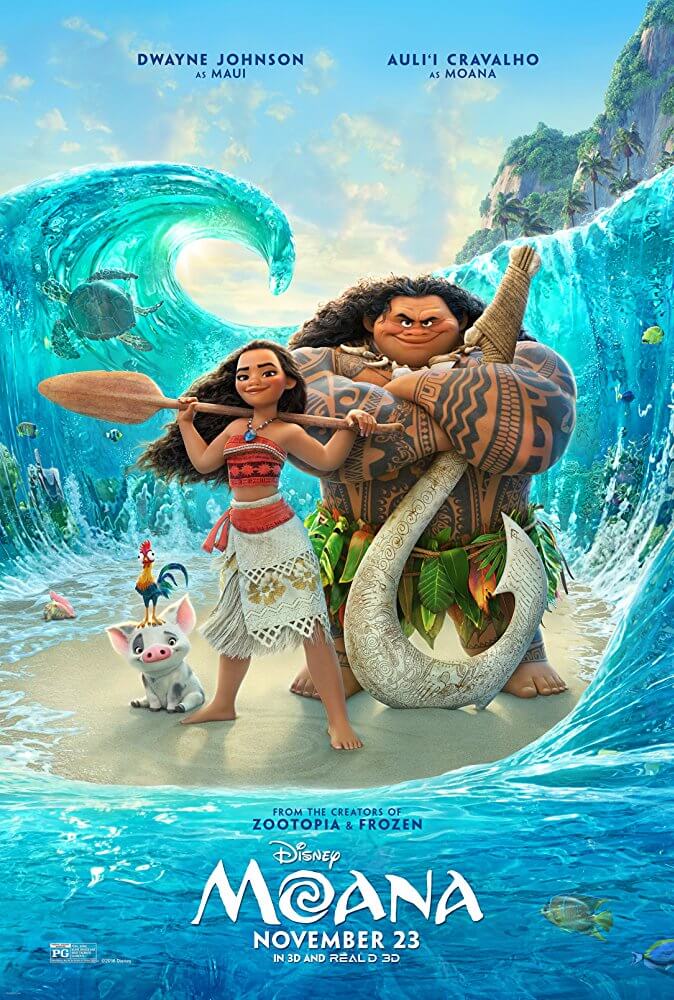 Seriously, what is up with teenage girls saving the world from thickheaded adults? Katniss Everdeen, Tris Prior, and now Moana.

Though there is much going for the movie about the musically-talented Polynesian princess, at the end of the day the result is the same: misguided adults have driven society to the brink of ruin and it’s up to a street-wise, plucky young woman to rescue the day.

Who cares if her father, the village chieftain, or the demigod Maui disagree with her tactics? She may not know how to sail, but the ocean told her she’s special, so by-George everyone listen to what she has to say!

In other words, Alexandria Ocasio-Cortez.

The wisdom of youth

From the start, Moana draws a gender line in the sand. Like most movies made this millennium, based on genitalia, you know which characters to root for.

After demigod Maui (voiced by Dwayne “the Rock” Johnson) steals the heart of the generous goddess Te Fiti, a great rot begins eating away at the world. A thousand years later, on the island of Motunui, young Moana is kept back from the sea because of her father’s fear of the water.

But Moana knows her people need her to take to the sea. Luckily her grandmother and mother cheer on her desire for exploration and Moana takes on the task of finding the lost Maui and returning the heart to Te Fiti.

During the voyage, Moana emerges as a heroine because she perseveres despite what her elders, usually men, tell her.

Her father is wrong. Maui is wrong. Tamatoa is wrong. Though her grandmother plays a small role in encouraging her at a low point, the extent of her advice is that everything she needs is within her. She doesn’t need a mentor: Moana is father, mother, chieftain and sage, all in the neat package of a teenage girl.

The folly of age

It’s easy to look at this movie and interpret it as an inspirational tale for children. What’s wrong with following your heart? Is there a problem with knowing you hold inside you the tools you need to author your own success?

At least, there is if the vehicle for those messages is the casual disrespect of elders.

Throughout the movie, Moana disregards the words of adults, often treating them as equals or beneath her. For example, her partnership with Maui is a teacher-pupil relationship…with the centuries-old demigod playing the role of student. A careful observer will note that he solves nothing. Moana rescues him from his island exile, from the Kakamora, from Tamatoa, and Te Kā.

Perhaps most illustrative of this is the climax scene where Moana returns Te Fiti’s heart. The entire story hinges on the fact that Te Fiti, who transformed after her heart was stolen, does not remember who she is. It is Moana the youngster, who tells Te Fiti “I know your name.”

Moana is a hero in spite of her elders, not because of them. Which is strange because the movie seems to want to celebrate heritage.

And while Moana discovers her people’s lost culture and helps reunite them with it, that storyline is confused by the fact that Moana rejects the decades of customs her people have created over the years since Te Fiti’s disappearance.

And so in order to reconnect her tribe with their roots, Moana disconnects from them. And within the context of the story, it all makes sense. The plot and characters conspire to allow for Moana’s success. Reality conforms to what Moana wants, rather than she to it.

So though she projects a more mature character overall, Moana is basically a politically correct, feminist version of the Little Mermaid.

Her out-of-touch father says no.

She gets that thing.

Her father comes around.

Welcome to the Millenial Millenium.

It’s only a matter of time before Moana proposes a Green New Deal.