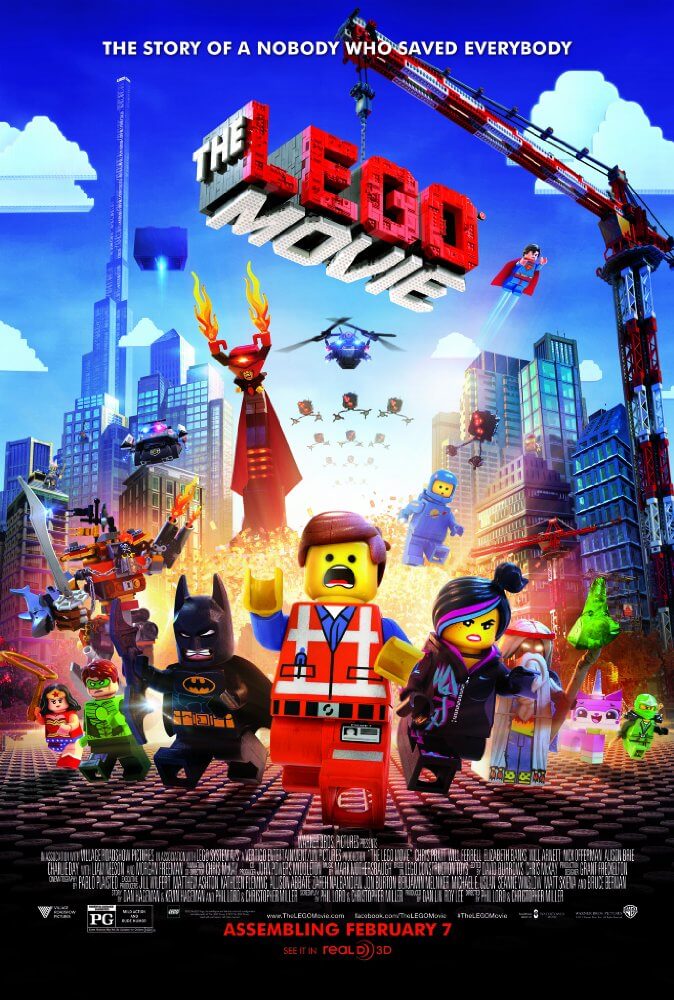 I officially hate Movie Agendas for making me watch this movie, for two reasons. First, I’m not five years old, and haven’t been in 54 years. Second, I’m a Trump supporter.

Third, I’m against brainwashing children and injecting insipid hard-Left politics into their young, innocent brains. I mean, I didn’t much care either for the fact that American college students have been turned into snowflakes willing to trade free speech for hot cocoa, and who react hatefully to comments from a Donald Trump speech… only to be told they were really from a Barack Obama speech… and then agree wholeheartedly with them.

I jotted down these notes in crayon:

The villain in this star-studded mess (featuring the voices of Chris Pratt, Channing Tatum, Will Arnett, Elizabeth Banks, Will Ferrell, Will Forte, Morgan Freeman, Jonah Hill, Liam Neeson, Shaquille O’Neal, Billy Dee Williams and other wealthy Hollywood Hillary donors) is named Lord Business (“Now my power will be unlimited. Nothing will stop me now!”), who is also President Business, who not only heads the country but also an evil corporation and, uh, the world. He resides atop a HUUUGE tower (Have. You. Got. It. Yet?) on the infinityth floor.

The end of the world is scheduled to place on Taco Tuesday – a vague reference, I suppose, to Trump’s alleged ethnic insensitivity when, back on May 5, 2016, he tweeted, “Happy #CincoDeMayo! The best taco bowls are made in Trump Tower Grill. I love Hispanics!”

(Note: They say you create the very thing you hate most. Perhaps Donald Trump is a tulpa generated by liberal mania; after all, this film was made in 2014, and exhibits an eerie prescience – like those grainy photos from the late 1800s that appear to show someone using a cell phone.)

The hitman/murderer is named Bad Cop (Neeson), understandable since police officers are paid assassins, as in Hey look, a young black man with his hands up signaling that he surrenders — BLAM! BLAM! BLAM!

Oh but wait, the fun’s just beginning. President Business builds walls. His company makes surveillance systems and voting machines. He gets regular ongoing reports on hero Emmet Brickowoski’s (Platt) torture (what, no waterboarding!?!). He says things like, “All I’m asking for is perfection — send in the micro-manager.”

In what amounts to LEGO paradise, Cloud Cuckoo Land, there is no government, there are no rules, no babysitters, no bedtimes, no frowny faces, no bushy mustaches, and no negativity of any kind. No trigger warnings required!

Part of a Team:

There’s even a song about the joys of conformity. It goes like this:

“Everything is awesome, everything is cool when you’re part of a team.” That’s kidspeak for “Monolithic centralized government… You didn’t build this… Resist… No one better smile, clap or stand during the State of the Union….”

Religion doesn’t escape unscathed, either. Morgan Freeman’s Vitruvius is a wise-man wizard who clues us in to the fact that religion is empty, prophecies aren’t real and any talk of a messiah coming to rescue us is silliness.

The final proof of what a political hit job this movie is becomes apparent when one notices that an army of undoubtedly liberal reviewers completely glossed over the heavy-handed political messaging and instead tossed out huzzahs such as “aesthetically phosphorus… crazy-funny animated lark… giggle-inducing gags… a digital movie with an analogue soul… an ode to imagination, creativity and busting outside the status quo.”

Is The LEGO Movie mere kids’ entertainment? Is it a way to indoctrinate small children so they will one day grow up to be the “right” kind of voters.

Depends on what your definition of “is” is.