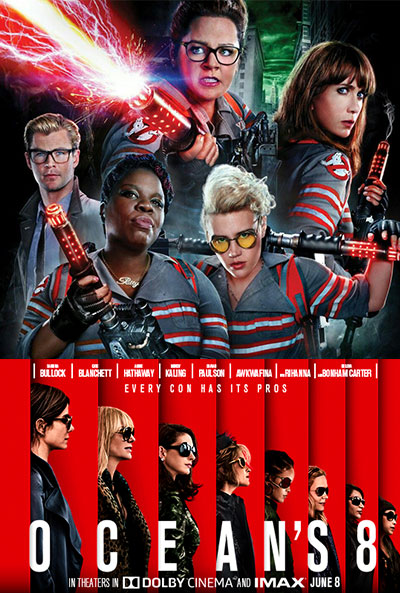 When I was a teenager, my buddies and I would hang out in the park on summer nights, down a bunch of brewskies, argue about sports and inevitably bellow something brainless like, “I need a woman.”

In recent years, however, that sentence has been extended, as in, “We need a woman…….. astronaut…… CEO…… secretary of state…… supreme court justice…… president.”

As if the genitalia would mean a significant improvement in..… whatever.

By that logic, 2016’s Ghostbusters: Answer the Call and this year’s Ocean’s 8 should have been better movies than the originals since, hey, women!

“This is a mediocre horror/comedy that deserves neither high praise nor disparagement.”

“After all the arguments… here’s the thing about the Ghostbusters movie: it is, without a doubt, average. All that argument? A waste of time.”

Didn’t help. Here’s the plot: Debbie Ocean has been planning the biggest heist of her life while in jail for five years, eight months and 12 days. She figures it will take a dream team of feminine felons, which she wastes no time assembling: jeweler Amita, street con Constance, suburban mom Tammy, hacker Nine Ball, and fashion designer Rose. Their goal is a necklace worth over $150 million.

Sorry, girls. One reviewer said that it “isn’t quite as smooth as its predecessors, but still has enough cast chemistry and flair to enjoyably lift the price of a ticket from filmgoers up for an undemanding caper.”

In 2016, the same year the estrogen-enhanced Ghostbusters appeared, Women’s Health magazine ran a story by Kristina Marusic titled 7 Reasons to Want a Woman as Your President, with the subhead, We’re not voting with our vaginas, but we’re definitely thinking about them. Among her reasons:

When, oh when do we finally internalize the understanding that people are people – no matter their gender, skin color, nationality, religion or anything else? That all of that stuff pales in insignificance compared to, as Dr. King phrased it, “the content of their character.”

Or of their movies.