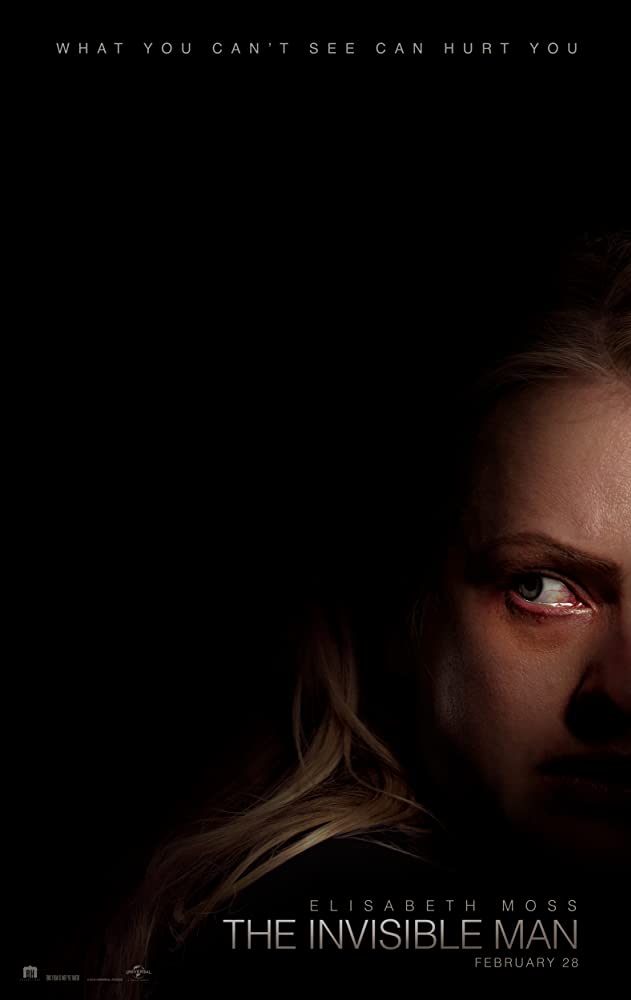 Tough to tell whether The Invisible Man is simply the name of a new movie or a commentary on the way men in American society have been minimized – and boys feminized – over the past three decades.

Directed by Leigh Whannell, the story finds heroine Cecilia Kass (Elisabeth Moss) stuck in a violent, controlling relationship with a scientist (Oliver Jackson-Cohen as Adrian Griffin), from whom she escapes in the dark of night. Then the abusive ex commits suicide… or so it appears. Coincidences ensue.

Cecilia is suddenly plagued with misfortune. She is disturbed by an unconfirmed presence in the house. When she leaves breakfast cooking a knife removes itself from the counter, then the stove turns itself up and catches fire. At a job interview with an architectural firm, Cecilia opens her portfolio to find it empty. Later, she is framed for murder.

What a loser, right?

Ah, but Cecilia knows it’s her now-invisible ex trying to murder her (c’mon, it’s what men do, right?), but begins to doubt her own sanity. No one believes her, and on and (yaaaawn) on………

Reviewers at Yahoo.com called the movie “an exaggerated version of every woman’s worst nightmare….” Jake Coyle of the Associated Press was sharp enough to recognize Invisible Man as “A… #MeToo allegory that, despite its brutal craft, rings hollow.”

Now, I’m not the one who said the #MeToo phenomenon is overblown, angry, envious, self-defeating, often hypocritical, politicized and weaponized, but…… oh wait, come to think of yeah, that was me.

This is yet another “toxic masculinity” screed – men as abusers, all sex is rape — this time wrapped inside a reworked classic tale. Yahoo again: “Cecilia realizes she needs to leave this abusive man, and she has the courage to do so. When she finally gets away, he literally comes to haunt her. He ruins every relationship she has. He makes her feel unsafe. He makes her question her own sanity. She has to fight to get her own life back, while everyone around her is telling her she’s crazy. And she has to go to extreme lengths to make sure he can never manipulate her again.”

Gee, if only I had a nickel for every time a guy I knew told me he wanted to manipulate the woman in his life, by now I’d have…… well, zippo.

That American pop culture has been working to dismantle masculinity for years is inarguable. In her book The War Against Boys: How Misguided Policies are Harming Our Young Men, Christina Hoff Sommers makes it clear that boys today are languishing socially and academically, resulting in staggering social and economic costs. In the wake of two major waves of feminism and decades of policy reform, women now outperform men in nearly every measure of social, academic, and vocational well-being.

Tucker Carlson devoted a segment of his Fox News show to the topic back in 2018 (more followed) and noted: “The signs are everywhere. If you are a middle-aged man you probably know a peer who has killed himself in recent years. At least one. If you are a parent, you may have noticed that your daughter’s friends seem a little bit more on the ball than your son’s. They get better grades, they smoke much less marijuana, they spend less time playing video games, they go to more prestigious colleges. If you are an employer, you may have noticed that your female employees show up on time, while men often don’t…. Something ominous is happening to men in America. Everyone who pays attention knows that. What’s odd is how rarely you here it’s publicly acknowledged.”

Shades of that other Invisible Man, the award-winning 1952 novel by Ralph Ellison. Its narrator is a nameless young black man who moves in a 20th-century United States where reality is surreal and who can survive only through pretense. Because the people he encounters “see only my surroundings, themselves, or figments of their imagination,” he is effectively invisible.

To a large degree in America today, so are all men. Remember Christine Blasey Ford must be believed, but Brett Kavanaugh is a monster?

This movie is intended to inspire fear – not just among movie audiences, but among Americans in general. Fear of men. Of masculinity. Of women losing that all-important victim status, the one that permits them and other supposedly marginalized groups to drape themselves in robes of righteous indignation as they demand they be given things – additional rights, preferential treatment, priority in hiring and college admissions, automatic assumptions of righteousness and more.

I wish movies like The Invisible Man would just… disappear.