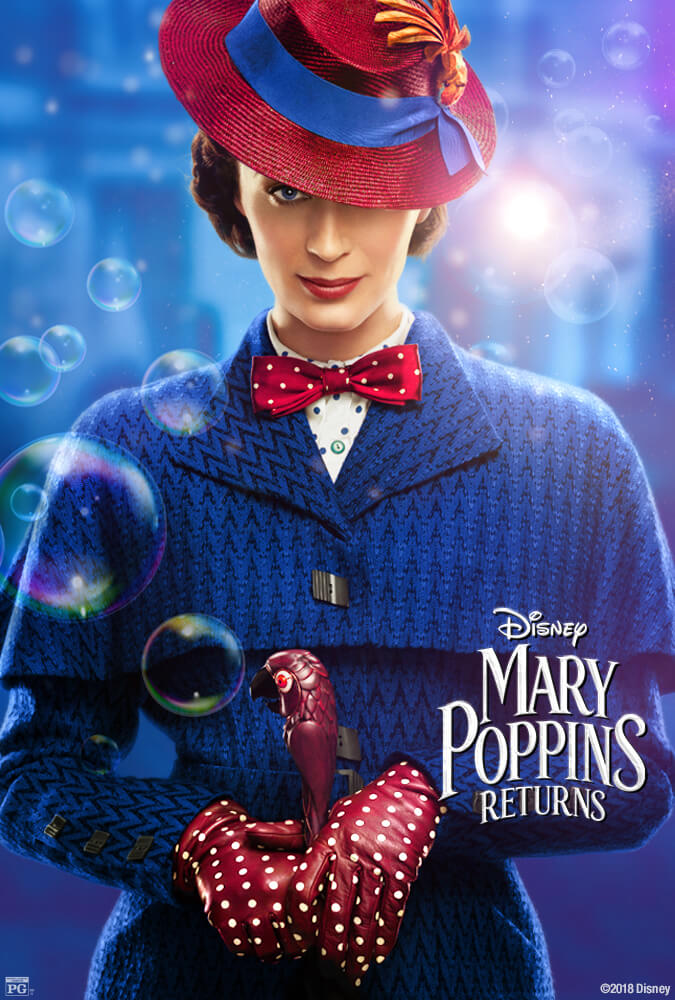 Even a spoonful of sugar can’t make this dreck go down.

And here’s why: there are several worrisome agendas at play in this sequel to beloved children’s classic Mary Poppins, each in its own oh-so-special way toxic and demoralizing for youngsters and grownups alike. To wit:

It’s London in 1935, and a grown-up and widowed Michael Banks shares the same family house with his kids John, Annabel and Georgie and kindly housekeeper, Ellen. Suddenly, out of the clouds wafts you know who… only she’s no longer Julie Andrews, but Emily Blunt.

Agenda #1: Old means obsolete. Why no Julie Andrews to show us an older, wiser, more sage Mary Poppins? Because youth sells, wrinkles and grey hair are unseemly, and if you age you get warehoused.

William “Weatherall” Wilkins Jr., the new president of the Fidelity Fiduciary Bank, and his lawyers arrive at the Banks house to post a repossession notice on Michael’s front door. Later, they will be represented by a rapacious wolf and his assistants, a weasel and a badger.

Agenda #2: Capitalism is evil. What did you think bankers were going to do – something that wasn’t evil?

Since the death of Michael’s wife Kate, the family has been struggling financially. Kate had handled the bills, you see, while the husband is too feather-brained to so much as remember to pay them.

Agenda #3: Women take care of business, while men are inept and helpless without them. Got that, boys? Not to worry, someone else… another woman… has shown up to save the family. If you missed this subliminal message don’t worry, you’ll see it again and again and again in nearly every TV commercial and sitcom.

The family has until midnight to get to the bank and save their house, but it’s already seven minutes to and they’ll never make it… so Mary simply turns back time.

Agenda #4: Life’s rules can be casually broken or disregarded if they prove inconvenient — like, say, immigration laws, or the presumption of innocence for Supreme Court nominees, or financial shenanigans perpetrated by female presidential candidates, or free speech, or the Constitution. Or election results.

In the end, the family house is saved.

Agenda #5: Everything will turn out okay, really. No need to deal with the harsh realities of life — like the fact that sometimes things don’t turn out okay, and that as adults we need to develop the inner strength to deal with adversity and learn to adapt. Phooey! Don’t wait for the trigger warning, and don’t worry your little head. Go have a nice nap in your favorite safe space — your parents’ basement sofa.

The final agenda may be the most insidious of all. Mary Poppins was a much-beloved family favorite from the moment it debuted in 1964. Why make a new installment? KA-CHINGGGG! Why leave a timeless classic film alone when you can turn it into a franchise and MILK THE FREAKING HELL OUT OF IT? Do the names Jaws, Death Wish, Star Wars, Halloween and Friday the 13th (you mean they aren’t the same?), Jurassic Park, Transformers, Resident Evil, Pirates of the Caribbean, Rocky, Saw, Alien, The Terminator, The Fast and the Furious ring a bell?

Agenda #6: Milk anything and everything for all it’s worth. Squeeze every last penny out of it because that’s the American way! Any work of art, no matter how cherished, how poignant, or how meaningful can be reduced to an asset, a dollar amount, a marketable commodity, a merchandise line. Art? C’mon, man, dost thou jest?